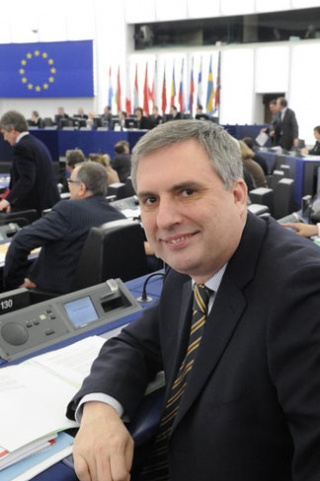 Ivailo Kalfin is member of the European Parliament from the Group of Socialists and Democrats (S&D). He is the head of the Bulgarian delegation in the S&D group. Since January 2013 Kalfin is S&D coordinator, responsible for budgetary policies.

Ivailo Kalfin is a Member of the European Parliament in the Group of the Progressive Alliance of Socialists and Democrats. He was elected to the European Parliament as a leader of the BSP election ticket in the EP elections on 5 June 2009. He is head of the Bulgarian Socialists delegation in the European parliament. Mr Kalfin works in five EP committees and delegations. As an economist most of his activities are in the Committee on Budgets. He is also full member of  the Delegation for relations with Albania, Bosnia and Herzegovina, Serbia, Montenegro and Kosovo. Between 2009 and 2011Kalfin was member of the Special Committee on the Financial, Economic and Social Crisis, as well as the Policy Challenges Committee.

Mr. Kalfin is substitute member of the Committees on on Budgetary Control and on Industry, Research and Energy and of the Delegation for relations with the countries of South Asia. He is EP rapporteur on the mandate of the European Investment Bank and on cyber security issues.

Before his election to the European Parliament Mr Kalfin was Deputy Prime Minister and Minister of Foreign Affairs of the Republic of Bulgaria (2005 – 2009). He was elected MP in the 37th, 38th and 40th National Assemblies and was a member of the Budget and Finance Committee and the Foreign Policy Committee (1995-1997, 2000-2001 and in 2005). Ivailo Kalfin was Economic Affairs Secretary to the President of the Republic of Bulgaria (2002-2005). He run as candidate for President of the Bulgarian Socialist Party (BSP) at the Presidential Elections on 23 October 2011.

Ivailo Kalfin holds a honorary doctorate of the Loughborough University, UK. Since 2001 he has been Principal Lecturer on the BA course in International Finance and Trade at Portsmouth University, UK.

Since July 2009 Member of the European Parliament

Since 2000 Principal Lecturer at the International University College, Sofia

MP in the 37th, 38th and 40th National Assemblies of the Republic of Bulgaria. Member of the Committees on Foreign Policy, and on Budget and Finance

1983 – 1988 Bachelor and Master Degree in International Economic Relations from the University of National and World Economy, Sofia